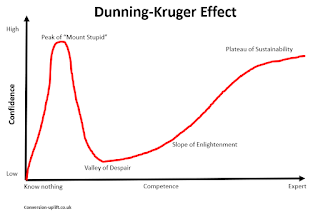 Dunning-Kruger is a bias that says that we tend to overestimate our competence in topics where we are less competent, and that our relative overconfidence decreases as we become more knowledgeable in that particular topic.

It is of course related and a little conflicting to the overconfidence bias and the better-than-average bias - where most car drivers believe themselves to be well above average, which makes no mathematical sense of course.

It is probably related to the regression to the mean effect. In fact, there are well knowns biases especially in surveys, such as the social desirability bias or the neutral answer dilemma. The social desirability bias  explains  that respondents  may  select an option  that  they  perceive to  be  more socially  accepted  or  desirable. In fact, this explains why a lot of voters answer centrist in surveys, but then vote Trump and Brexit - people subconsciously refuse to disclose publicly that they have silly political views.

The neutral point dilemma is that people tend to overuse the midpoint in Likert scales, and choose it as a non answer, neutral ground, or uncertainty point - when undecided, they go middle (see also Chyung et all 2017, Evidence-Based Survey Design: The Use of a Midpointon the Likert Scale).

Dunning-Kruger is also related to the imposter syndrome - the version that says that sometimes we tend to underestimate our competence in topics where we are actually experts.

Both biases are probably related to the "I know that I know nothing" principle of Plato/ Socrates - there is a whole controversy there, but the idea is pretty much the same, it is about humility when faced with science and nature.

Overall, the article The Dunning-Kruger Effect Is Probably Not Real is misleading. Especially the title.

It starts by saying that the author initially had a wrong understanding of the topic (yes this is Dunning Kruger in action in a Dunning Kruger article). Then corrects that misunderstanding of the author himself (duh), which makes for a rather boring story. Yes, we agree that a lot of people misinterpret a lot of things, and that they often don't know that. And also, indeed Dunning-Kruger is often misinterpreted.

The second part of the article shows a graph without details, to prove that a computer randomly generates 2 divergent sets of data. Maybe they did it correctly, but I call bullshit until they publish the algoritm.

And in the conclusion it tells us that maybe the Dunning-Kruger is correct but the underlying reason is different, namely regression to the mean - again showing lack of understanding of the topic. It was never about the reason, it was always about the effect - as they seem to have already admitted somewhere in the first part.

Why are all these theories and biases conflicting? Exactly because they are models of human behavior. People don't naturally behave in patterns. People and society are chaotic, random, and difficult to explain. Instead, scientists are creating models and imagine patterns in order to try to understand and explain human and social behavior. But in fact, different people behave differently, and the same people behave differently in different situations. This is why the only way we can assess the validity of a theory or model is utility.

And this is why Dunning Kruger is a good model: because it is useful.

Email ThisBlogThis!Share to TwitterShare to FacebookShare to Pinterest
Labels: Sociology

Accidents happen. E.g. a bus crashes into a metallic protection and people die. When accidents happen  it's important: 1. To be outraged...